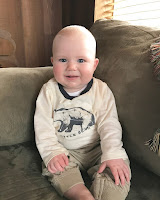 I'm a little behind on our monthly updates!  The last few months, we've had quite a bit going on.  Grayson is now almost 8.5 months old!  He's almost been out of me as long as he was in me, I can't believe it!  He is (at least) 20 lbs, wearing 9-12 month clothes, and eating solids now! He has liked everything he as tried so far, except rice cereal.  He doesn't have any teeth yet, so he's mostly getting baby food.  If I'm eating something soft like mashed potatoes, he'll get some of those too and if he's lucky, his Uncle Brandon will try to feed him all the sweets possible.
In March, my cousin Ropa and his wife Bre came to Vegas for a rugby tournament.  We hadn't seen them since Christmas and Bre said he's like a different baby because he's so big and has changed so much!  A few days later, we also got to see my Uncle Kevin and Aunt Lis, who were in town for a few days!  It's so much fun having visitors.
The following weekend my parents and some good family friends all came to town to go to a concert, so we crashed the party and hung out with them all day!  After that weekend, Grayson and I drove back to Redding with my parents where he met his great grandparents, and lots of my friends from high school.  We were very spoiled while we were there, and spent lots of time shopping with Grandma Cyndi, but don't tell Grandpa. 😉 My grandma Fiti had been fighting cancer for the past year, and my granddad isn't getting any younger so I was really glad he was able to meet them.  They are some of the best people in my life.  Grayson turned seven months while we were there, and that's where he started getting on his hands and knees like he wanted to crawl!
Two days after we got back from Redding, Grayson had to have a minor surgery.  I was so nervous, but he did great and had a great recovery.  That weekend, Robyn, Troy, and Saylor were passing through town so we got to spend a few hours with them.  I love seeing Grayson with his cousins.
The past month, Bryant, Grayson, and I went to Hoover Dam for the first time.  It was pretty cool, but it even cost money just to go in the visitors center (which we didn't want to spend) so we just walked around.
At the beginning of April we went down to Chino Hills for General Conference weekend.  Luckily he didn't get sick this time!  It's always a good time whenever we go down there.
Grayson also rode in the seat of a shopping cart instead of just being in his car seat.  He loved it!  He also started officially crawling!!  He is now all over the place.  He can open the cover to our fireplace, and has discovered the light sockets, computer cords, and door stoppers.  He is one busy boy!!
Bryant and I had hour four year anniversary on April 13th and took G on a hike at Lake Mead that day.  We've been trying to get outside and do some hiking and other things before it gets too hot to.  This last month was also Grayson's first Easter.  The Easter Bunny didn't come to our house, but luckily the Grandma Bunny did.
I can't believe we are closer to Grayson being one than him being a newborn!  He's the best.  Until next month... 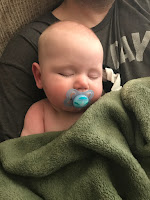 Can never have too many pictures of them sleeping. 😍 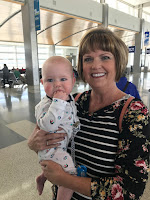 Saying bye to Grandma at the airport. 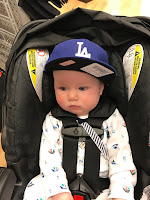 Repping the Dodgers for Grandpa Jeffy. 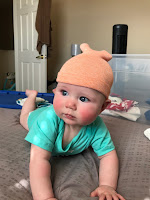 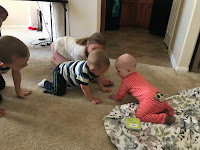 Cousins showing him how to crawl! 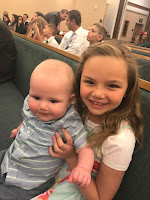 Grayson and Penny on Easter. 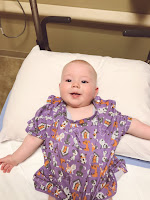 Waiting for his surgery.

Posted by Julie Johansson at 9:17 PM